The 50 most thought-provoking philosophies, each explained in half a minute 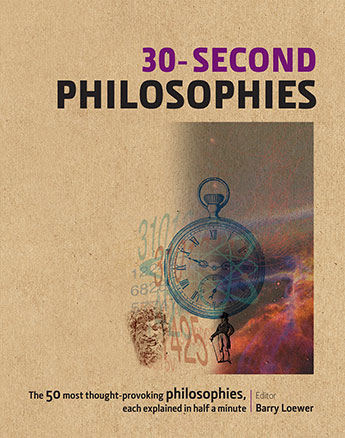 A fascinating guide to the main ideas and influential thinkers in the world of philosophy.

Explaining the most significant ideas in philosophy in under a minute. Cogito ergo sum. Cynicism. Dialectical Materialism. Existentialism. The Socratic Method. Deconstructionism. Everybody knows what they mean. Or thinks they know what they mean. At least you have probably heard of them and like to bandy about them to impress your friends. But do you have the back up? What happens if you get trapped in the corner by a real hottie with a masters degree in phenomenology?

30-Second Philosophies takes a revolutionary approach to getting a grip on the 50 most important and significant schools of philosophy. It will challenge a half century of great thinkers to quit fretting about the meaning for a while and explain the most significant theories of philosophical thought in half a minute, using nothing more than two pages, 300 words and a metaphorical image. Here in one unique volume you have the opportunity to pick the potted brains of our leading philosophers and understand complex concepts such as 'the categorical imperative' without ending up in a darkened room with an ice pack on your head.
More books by this author