Inside the Beaconsfield mine disaster 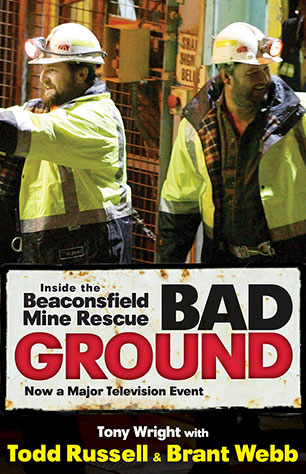 The exclusive, authorised account of the Beaconsfield mine crash, from the two survivors who were trapped underground, Brant Webb and Todd Russell.

Bad Ground is the exclusive, authorised story of the 14-day entombment and rescue of Beaconsfield miners Brant Webb and Todd Russell and the fascinating aftermath. The blast and rock fall which occurred one kilometre underground on Anzac Day, 25 April 2006 killed their fellow worker, Larry Knight and left their shift manager in doubt they were also dead. Tony Wright's enthralling, often spine-chilling narrative begins with a masterfully rendered portrait of the small Tasmanian mining township in which the drama unfolded, a township that revealed to him its deepest secrets. Bad Ground reads like a psychological thriller as it follows the many intriguing and moving developments surrounding its central characters and their families, above ground and deep down below.
More books by this author

Tony Wright is the national affairs editor of The Bulletin and provided the most extensive, in-depth coverage of the mine disaster and rescue extensively in the magazine during his first 20 days in Beaconsfield, during which he forged extensive links with the local mining community.