A Graphic Biography of the Genius of Beyonce 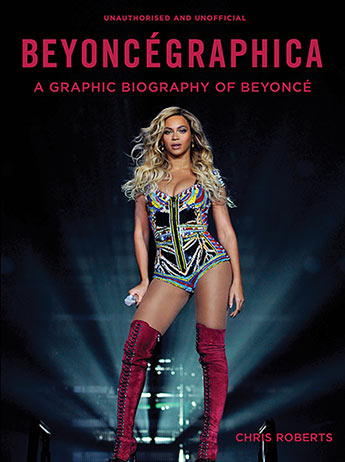 In this innovative graphic biography, Beyonce’s genius is explored and celebrated like never before, with fun infographics looking at the highlights and success of her career alongside an insightful narrative telling the story of how a young singer from Texas transformed into a global superstar.

BEYONCE needs only a one-word introduction. Universally recognised and with a platform the world over, she is a singer, an artist, an activist and an icon.
In this innovative graphic biography, Beyonce’s genius is explored and celebrated like never before, with fun infographics looking at the highlights and successes of her career - from costume changes to record sales, her impressive vocal range to her work off-stage, as well as including the all-important breakdown of some of her most popular dance routines. Beyonce’s astonishing accomplishments are showcased against fellow legends of the industry in addition to celebrating her achievements in her own right.
Drawing on her 26-year career, Chris Roberts tells the story of how a young singer from Texas transformed herself into a globally revered performer who came to dominate the charts, our screens and even wardrobes. Who has come to represent so much more than the pop industry, through philanthropy, politics and campaigning, Beyonce has broken the mould of what it means to be a superstar and that star continues to rise.
More books by this author

Chris Roberts lives in West London. He has written about music, films and books for innumerable publications and websites and interviewed everyone from David Bowie to Janet Jackson. He was the editor of Idle Worship, hailed in the New York Times as ‘the most original book about rock ‘n’ roll ever’, and edited Blondie's Panic of Girls magazine at the band's request. Often appearing on TV and radio, he has also published books on Kate Moss, Lou Reed, Michael Jackson, Tom Jones, Abba, Talk Talk, Scarlett Johansson, Pharrell Williams, the Gothic arts and many others.