My adventures as a fisherman turned restorative ocean farmer 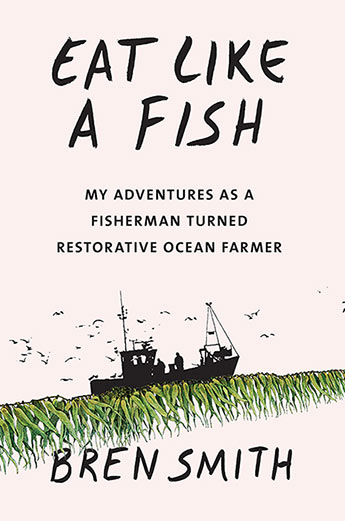 From the aquatic world's Anthony Bourdain, Eat Like a Fish is a former fisherman's memoir, manifesto and vision for the future of food: restorative ocean farming.

'I used to be a commercial fisherman, chasing your dinner on the high seas for a living, but now I farm twenty acres of saltwater, growing a mix of sea greens and shellfish.'

In Eat Like a Fish Bren Smith - a former commercial fisherman turned restorative ocean farmer - shares a bold new vision for the future of food: seaweed. Part memoir, part manifesto, through tales that span from his childhood in Newfoundland to his years on the high seas aboard commercial fishing trawlers, from pioneering new forms of ocean farming to surfing the frontiers of the food movement, Smith introduces the world of sea-based agriculture and advocates getting ocean vegetables onto our plates. There are thousands of edible varieties in the sea!

Here he shows how we can transform our food system while enjoying delicious, nutritious, locally grown produce, and how restorative ocean farming has the potential to create millions of new jobs and protect our planet in the face of climate change, rising populations, and finite food resources. Also included are recipes from acclaimed chefs Brooks Headley and David Santos.

Written with the humour and swagger of a fisherman telling a late-night tale, this is a monumental work of deeply personal food policy that will profoundly change the way we think about what we eat.
More books by this author

Bren Smith is a former commercial fisherman turned ocean farmer who pioneered the development of restorative 3D ocean farming. Born and raised in Newfoundland, he left high school at the age of 14 to work on fishing boats from the Grand Banks to the Bering Sea. His writing has appeared in The New York Times, National Geographic and The Atlantic. His ocean farm won the Buckminster Fuller Challenge for ecological design and, in 2017, was named one of Time magazine's Best Inventions. He is the owner of Thimble Island Ocean Farm and executive director of the nonprofit Green Wave, which trains new ocean farmers.