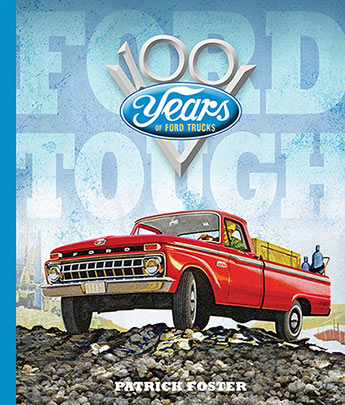 Tells the entire Ford truck story from the very beginning, when Ford got its start in truck production.

In July 1917 Ford Motor Company introduced a one-ton chassis for commercial trucks, marking what many historians feel was its official entry into the dedicated truck business. Prior to this the company had offered commercial cars, including depot hacks and delivery van bodies mounted on its standard passenger car chassis. Dealers had also offered small after-market pickup beds that could be placed on the rear of a Model T car to convert it to a pickup. But with the debut of the rugged Model TT truck chassis, Ford was firmly in the truck market. Eight years later it introduced its first factory-produced pickup, a sturdy half-ton job that met with great acceptance. During the century that has passed since that first Ford truck chassis, the F-series has become the best-selling truck in the world, and the best-selling vehicle of any type in America. Every year the company sells over 700,000 F-series trucks, and well over 1.5 million trucks of all types, just in the U.S. It's an amazing success.

Ford Tough: 100 Years of Ford Trucks tells the entire Ford truck story from the very beginning, when Ford got its start in truck production. This book provides the history of the wide array of models Ford has built over the past century, including the Model A roadster pick-up, stylish 81C pickups, legendary 1948 F-1, Bronco, Courier, Ranchero, Econoline.
More books by this author

Patrick R. Foster is a well-known and respected automotive writer and historian. Foster is an authority on AMC and its various sub-brands and has written a number of books on that automaker, as well as many others, including Jeep and Studebaker. His most recent books for Motorbooks are Jeep: A History of America's Greatest Vehicle and American Motors Corporation: The Rise and Fall of America's Last Independent Automaker.