Gloria Steinem (I Know This to be True) 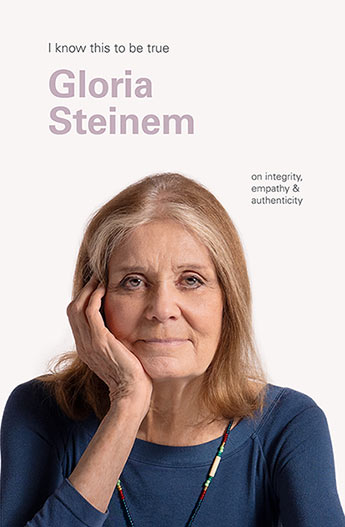 One of America's most influential political activists on issues of equality and gender, Gloria Steinem answers fundamental questions about leadership and what really matters to her.

Gloria Steinem is a writer, lecturer, feminist organizer and frequent media commentator on issues of equality and gender, and has helped found various organizations centred on generating equal rights for women. She is the co-founder of pioneering feminist magazine Ms. Magazine, and career has earned her numerous awards including the Lifetime Achievement in Journalism Award, the Penney-Missouri Journalism Award, the United Nation's Society of Writers Award and Ceres Medal, and the Presidential Medal of Freedom. Her latest book, My Life on the Road - her first in over twenty years - is a New York Times bestseller and one of O: The Oprah Magazine's Ten Favorite Books Of The Year. She lives in New York City.

Gloria Steinem is a writer, political activist and feminist organiser. She was a founder of New York and Ms. magazines, and has authored many books, including My Life on the Road, Moving Beyond Words, Revolution from Within and Outrageous Acts and Everyday Rebellions. The organisations she co-founded include the Ms. Foundation for Women, the Women's Media Center and Equality Now. She has also produced documentaries, most recently, with Amy Richards, Woman, for VICELAND, a series on global violence against women. In 2013, President Barack Obama awarded her the Presidential Medal of Freedom. gloriasteinem.com; Facebook/GloriaSteinem; Twitter: @GloriaSteinem

Created by Geoff Blackwell and Ruth Hobday. Geoff Blackwell is a New Zealand-based creator of award-winning books, audiobooks, exhibitions, films and photographic portraits. Together, he and his creative partner Ruth Hobday have originated books for publishers in forty countries.