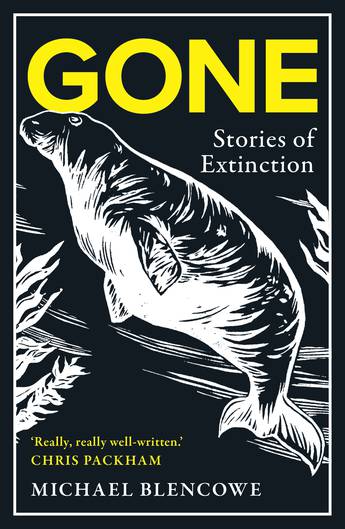 Gone is a fascinating and timely illustrated narrative exploring the lively tales of eleven extraordinary extinct species from around the globe--sharing an enlightening story of extinction and conservation for today.

Dynamic naturalist Michael Blencowe has travelled the globe to uncover the fascinating backstories of eleven extinct animals, which he shares with charm and insight in Gone.

Inspired by his childhood obsession with extinct species, Blencowe takes us around the globe - from the forests of New Zealand to the ferries of Finland, from the urban sprawl of San Francisco to an inflatable crocodile on Brighton's Widewater Lagoon. Spanning five centuries, from the last sighting of New Zealand's Upland Moa to the 2012 death of the Pinta Island Giant Tortoise, Lonesome George, his memoir is peppered with the accounts of the hunters and naturalists of the past as well as revealing conversations with the custodians of these totemic animals today. Featuring striking artworks that resurrect these forgotten creatures, each chapter focuses on a different animal, revealing insights into their unique characteristics and habitats; the history of their discovery and just how and when they came to be lost to us. Blencowe inspects the only known remains of a Huia egg at Te Papa, New Zealand; views hundreds of specimens of deceased Galapagos tortoises and Xerces Blue butterflies in the California Academy of Sciences; and pays his respects to the only soft tissue remains of the Dodo in the world.

Warm, wry and thought-provoking, Gone shows that while each extinction story is different, all can inform how we live in the future. Discover and learn from the stories of the:

A modern must-read for anyone interested in protecting our earth and its incredible wildlife, Gone is an evocative call to conserve what we have before it is lost forever.
More books by this author

Michael Blencowe (author) lives in Sussex where he works and volunteers for several local wildlife conservation charities. For the past ten years he has been inspiring people to take action for nature through his writing and by leading wildlife events, delivering talks and putting hawk-moths on children's noses. He is co-author of The Butterflies of Sussex (Pisces, 2017) and created the mini-book of caterpillars which accompanies Julia Donaldson's The Woolly Bear (Macmillan, 2021). He is saving his pennies so that he can one day go to Bering Island.