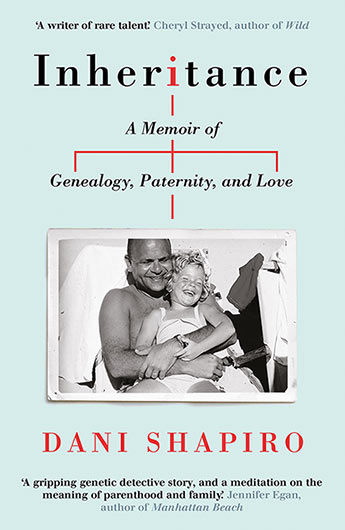 From the acclaimed, best-selling memoirist and novelist - 'a writer of rare talent' (Cheryl Strayed) - a memoir about the staggering family secret uncovered by a genealogy test: an exploration of the urgent ethical questions surrounding fertility treatments and DNA testing, and a profound inquiry of paternity, identity, and love.

'All my life I had known there was a secret. What I hadn't known: the secret was me.'

In the spring of 2016, through a genealogy website to which she had whimsically submitted her DNA for analysis, Dani Shapiro received the stunning news that her father was not her biological father. Everything she had believed about her identity was a lie.

Shapiro's parents had died when she was in her twenties. With only a handful of figures on a webpage, Shapiro sets out to discover the truth about herself and her history.

Inheritance is a genetic detective story; a memoir that reads like a thriller. It is a book about secrets -secrets within families, kept out of shame or self-protectiveness; secrets we keep from one another in the name of love. It is a book about the extraordinary moment we live in a moment in which science and technology have outpaced not only medical ethics but also the capacities of the human heart to contend with the consequences of what we discover.
More books by this author

Dani Shapiro is the author of the memoirs Hourglass, Still Writing, Devotion, and Slow Motion and five novels. Also an essayist and a journalist, Shapiro's short fiction, essays, and journalistic pieces have appeared in The New Yorker, Granta, Tin House, One Story, Elle, Vogue, O, The Oprah Magazine, The New York Times Book Review, and many other publications. She lives with her family in Connecticut.