Last Call for the Dining Car 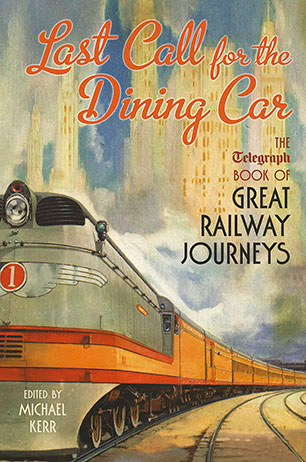 An engrossing and delightful compendium of the most romantic and adventurous railway journeys in the world.

Ever since Paul Theroux embarked in London on the first train of his Great Railway Bazaar, railways have been a rich source for the best travel writing. This is truer than ever in the twenty-first century. As the environmental implications of relentless air travel cast an ominous shadow over the prospect of foreign adventure, the opportunity to jump on a train at St Pancras and be whisked straight to the continent offers a wonderful alternative. Train travel has assumed a new pragmatic importance as well as romance - which is no doubt why so many more tour companies are offering a great train ride as part of their holiday itineraries.

Now, Michael Kerr, the Telegraph's deputy Travel Editor, has burrowed deep in the newspaper's archives and collected together the very best of its writings about the railway: here are journeys non-stop from London to Vladivostok; across the Canadian Rockies; the first train to traverse Australia from Darwin to Alice Springs; and on the teeming, crawling, travelling adventure of Indian railways. In scenes much more familiar to the British commuter, Boris Johnson discovers his 'inner McEnroe' thanks to signal failure in the Midlands, and Michael Palin samples the delights of British Rail Inter-City. This is an anthology that will appeal to the railway buff and the armchair traveller alike; to anyone who has ever Inter-railed in their youth and everyone nostalgic for the days when the only way to cross a continent was by train.
More books by this author

Michael Kerr is deputy travel editor of the Daily Telegraph. He edited Last Call for the Dining Car for Aurum and Bon Voyage!: The Telegraph Book of River and Sea Journeys.