A Visual History of Our Quest to Explore the Red Planet 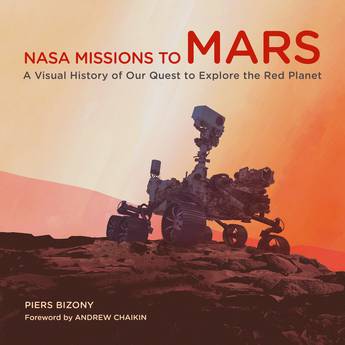 With authoritative text and NASA photography and artworks, NASA Missions to Mars tells the story of NASA's programs to explore the Red Planet—from the first tentative flybys to the present—and offers a glimpse into the future of Mars exploration.

Gorgeously illustrated with NASA photography, the large-format (12 × 12 inches) NASA Missions to Mars examines everything from the first tentative steps toward the fourth planet to the 2021 landing of rover Perseverance and beyond.

Space exploration has always been about pushing boundaries, but perhaps the achievement which has most piqued a sense of possibility has been the exploration of Mars. Beginning with Soviet and American flybys in the early 1960s that were part and parcel of the Space Race, acclaimed space historian Piers Bizony continues through complete coverage of the Viking 1 and 2 missions of 1975-1976. Bizony also traces NASA's acclaimed rover program, describing the development, technologies, mission histories, and achievements of the rovers Sojourner, Opportunity, Spirit, and Curiosity—all on the 25th anniversary of their first landing.

- An engaging and complete history of Mars exploration
- A treasure trove of imagery from the NASA archives, including photos and cartography beamed home, artworks and concept drawings created during development phases, as well as photography created to document testing phases
- A glimpse of future plans for Mars exploration and habitation
- Coverage of orbiters sent to the red planet by not only NASA but by space agencies from Russia, India, Japan, Europe, China, and the UAE

Humankind's fascination with Mars can be traced back to prewar science fiction. While the billions of dollars and ingenious innovations have allowed us incredible views from more than 51 million miles away, no less incredible are the insights these missions, hardware, and scientists have provided into our universe—and our own planet. NASA Missions to Mars is your complete illustrated history of those efforts and a necessary volume for the bookshelf of any space enthusiast!
More books by this author

Piers Bizony is an experienced multimedia professional who has written about science and the history of technology for a wide variety of publishers worldwide, and has undertaken major projects for the media departments at NASA and ESA. He has also gained substantial experience within the film and television industries. The author of Quarto's Moonshots, The Art of NASA, NASA Space Shuttle: 40th Anniversary, and other titles, Bizony also worked closely with the family of Stanley Kubrick, in conjunction with Warner Bros. and fine art publishers Taschen on a large-format book about the making of 2001: A Space Odyssey.