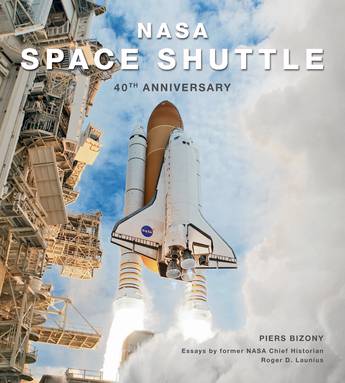 Rare photography and stunning artworks illustrate the history of NASA's Space Shuttle program from 1981 to 2011, providing an unprecedented look at the missions, equipment, and astronauts.

Officially known as the Space Transportation System (STS), the Space Shuttle program operated from 1981 to 2011. During that time, five Shuttle systems took part in 135 missions under the operation of NASA. This approach-namely reusable spacecraft-revolutionized space exploration. NASA Space Shuttle: 40th Anniversary traces the STS's 30-year operational history. Essays by former NASA chief historian Roger Launius are accompanied by a collection of incredible Shuttle photography and imagery mined from the depths of NASA's archives by aerospace historian Piers Bizony-all of it presented in large-format color. Readers will witness the pre-1981 evolution, the missions, astronauts, ground personnel and infrastructure, and amazing accomplishments of the Shuttle program and its spacecraft: Columbia, Challenger, Discovery, Atlantis, and Endeavour.

From the launch site at Cape Kennedy, Florida, to mission control in Houston, Texas, to the landing site at Edwards Air Force Base, all aspects of Shuttle operation are covered, including key roles in efforts such as the Hubble Telescope and International Space Station, as well as the tragedies of Challenger and Columbia disasters. Every carefully chosen image in NASA Space Shuttle: 40th Anniversary tells an aspect of the Shuttle story. The resulting book is not only a unique view of a key chapter of NASA history-it's a compelling collection of stunning NASA photography and illustrations.
More books by this author

Roger D. Launius is former associate director of collections and curatorial affairs at the Smithsonian National Air and Space Museum. From 1990 to 2002, he served as chief historian of NASA. He has authored and coauthored numerous books, including The Smithsonian Book of Space Exploration.

Piers Bizony is the author of The Space Shuttle: Celebrating Thirty Years of NASAs First Space Plane and One Giant Leap: Apollo 11 Remembered, both from Zenith Press. He has written about science, aerospace, and cosmology for a wide variety of magazines in the United Kingdom and the United States. His previous books include 2001: Filming the Future, The Rivers of Mars, Starman (a biography of Yuri Gagarin), and Space: 50, marking the fiftieth anniversary of Sputnik.