Riding Free in the 21st Century 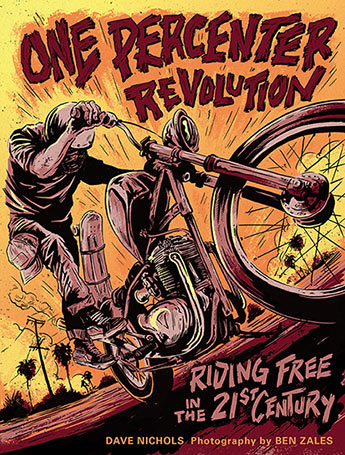 One Percenter Revolution introduces readers to a whole new generation of rebels dedicated to living on the edge and letting their freak flags fly!

One Percenter Revolution: Riding Free in the 21st Century finishes the trilogy started by best-selling author and editor of Easyriders magazine Dave Nichols with One Percenter: The Legend of the Outlaw Biker and The One Percenter Code: How to Be an Outlaw in a World Gone Soft.The biker lifestyle began in earnest in the years following World War II and hit its first peak in the 1960s and '70s. That popularity was renewed in the 21st century. It makes sense. In this world of declining earning power and fiercely enforced politically correctness, the anti-hero figure of the outlaw biker stands above the crowd, a beacon of freedom.One Percenter Revolution introduces readers to a whole new generation of rebels dedicated to living on the edge and letting their freak flags fly! The book is populated with nonconformists, from 20-something bikers breathing new life into the 1970s outlaw lifestyle to city-dwelling café racers who ride the razor's edge. From Euro parkour disciples of danger to wing suited batmen, this revolution is gaining in momentum like a rat rod doing a smoky burnout.One Presenter Revolution follows a whole new generation of wolves thriving in a land of sheep. Sons of Anarchy has inspired young people to don leathers and twist the grip on stripped down motorcycles, looking to quell their thirst for rebellion, and films like Mad Max: Fury Road preaches to would-be War Boys, the stage is set to explore the evolution of outlaw bikers and the revolution of the modern savage.
More books by this author

Dave Nichols has been involved in many forms of media both in front and behind the camera since 1978. He has written and produced over 1,200 TV commercials with Shadoe Stevens, Inc., a series of television comedy specials for HBO/Cinemax, and American Top 40 for ABC Watermark. He has produced live events for Jani International and live sports programs for television, created early-learning software for Microsoft, and developed ad campaigns for radio, TV, and feature film trailers for New World Pictures. Nichols was the on-camera host of V-Twin TV, a 26-episode motorcycle-related television series seen on the SPEED channel. He is also the bestselling author of Top Chops, Indian Larry: Chopper Shaman, One Percenter, and One Percenter Code, all published by Motorbooks. He lives in Ashland, Oregon, and Los Angeles and is currently creating TV series and feature film projects with HBO producer Michael Hill.