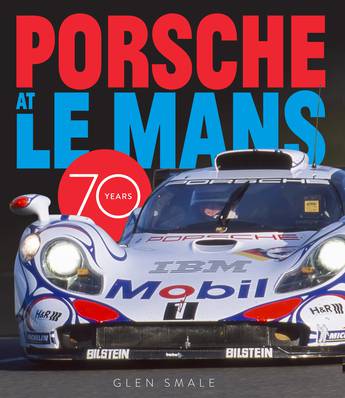 Looking back on 70 years of the legendary marque at one of the worlds greatest races, Porsche at Le Mans is authoritatively written and packed with photos, history, and results.

Packed with photography, narrative, and race results, Porsche at Le Mans is the definitive illustrated history of Porsche's 70 years of competition in the worlds greatest motor race. Porsche's first visit to Le Mans came in 1951 with a streamlined 356 model, complete with aerodynamic wheel fairings. In a precursor to the reputation Porsche would establish over the next seven decades at the famous endurance race, the 356 ran like clockwork, beating the coveted record for the shortest time spent in the pits. Since that memorable debut, Porsche has won outright at Le Mans 19 times, more than any other marque, with a record series of seven consecutive victories from 1981 to 1987.

This beautifully designed and extensively illustrated book is your definitive history of Porsches participation at La Sarthe, chronicling the exploits of both the works team cars and privateer entries. Since 1951, Porsche has been represented at every single running of the 24 Hours. The models that have taken part comprise a roll call of great sports racing cars: 550 Spyder, 718 RSK, 904, 906, 907, 908, 910, 917, 936, 935, 956, 962, and GT1-right up to the hybrid 919 that won from 2015 through 2017. To this daunting list can be added the ubiquitous 911, the privateers choice for the race (in 1971, a year that saw a record number of Porsches take part, 19 of the 33 Porsches in the race were 911s). And hundreds of them are depicted in historical photos. In addition to the legendary cars, you will bear witness to the exploits of Porsche drivers, a veritable murderers row of motorsport greats, including Derek Bell, Herbert Muller, Helio Castroneves, Mario Andretti, Jacky Ickx, Jo Siffert, Jochen Rindt, Mark Donohue, and Vic Elford, to name just a few. Meticulously compiled by noted Porsche historian Glen Smale, Porsche at Le Mans is the most exhaustive celebration of the subject, created with full access to the Porsche archives in Stuttgart. The resulting tome is a treasure trove of history, photographs, data, and technical information, indispensable to any serious Porsche or motorsport enthusiast.
More books by this author

Glen Smales books include Porsche 917: The Complete Photographic History; Jaguar E-type: Portrait of a Design Icon (for which he received the Laurin and Klement "Design Writer of the Year" award in 2007); and Porsche 956/962: A Photographic History. Glen is also editor of Porsche Road & Race, an online journal. He lives in Carmarthenshire, Wales.