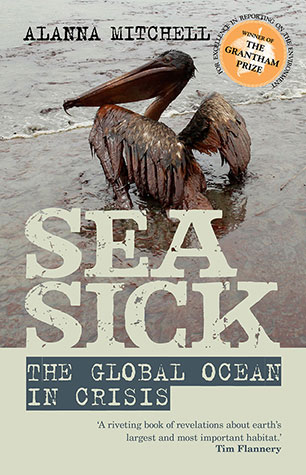 Essential reading for anyone interested in the health of our planet and its oceans.

The world's oceans make up 99 per cent of the living space on our planet and are home to more than half of all the earth's creatures. They are our life support, regulating the global climate and when this delicate ecosystem is threatened, so is our survival. The first book to look at the planetary environmental crisis through the lens of the global ocean, Seasick dives down on a journey through the planet's hidden realms. Each chapter features a different group of researchers who explore the importance of ocean currents, the effects of acidification or the extinction of marine species. With award-winning journalist Alanna Mitchell at the helm, readers submerge 3000 feet to gather sea sponges that may help to cure cancer, see first-hand the lava lamp-like 'dead zone' covering 17,000 square kilometres in the Gulf of Mexico, and witness the simultaneous spawning of corals under a full moon in Panama. Seasick will give you a new reverence for the source of all life on earth.
More books by this author

Alanna Mitchell is the author of the internationally acclaimed Dancing at the Dead Sea: Tracking the World's Environmental Hotspots. In 2000, while working at Canada's national newspaper The Globe and Mail, she was named the best environmental reporter in the world by the Reuters Foundation. The prize led her to be a visiting scholar at Oxford University's Green College. She is the recipient of many other awards, including the Reuters Foundation's Best Environmental Reporter in the World award in 2000 and the Granthan Prize for Environmental Reporting in 2010. After a career as a newspaper journalist for 17 years, she is now a public speaker and independent writer living in Toronto, Canada.