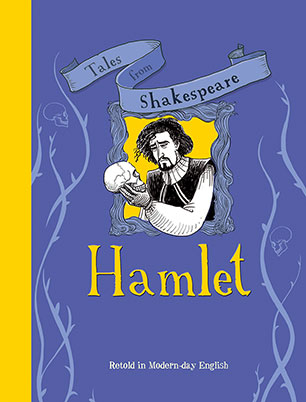 Hamlet is miserable after the death of his father, but when the ghost of his father appears and reveals that he was murdered, Hamlet decides to seek his revenge.

Hamlet is miserable after the death of his father, but when the ghost of his father appears and reveals that he was murdered, Hamlet decides to seek his revenge.

Step inside for a tragic tale of deceit and revenge.

QED has chosen four plays to continue the successful Tales from Shakespeare series. These titles serve as the perfect introduction into the works of Shakespeare.

The plays are retold as stories using clear and contemporary language, whilst each title keeps its originality by including key quotations from the original text.

Lively illustrations bring these popular plays to life and will be sure to captivate WC the imagination and interest of young readers.
More books by this author

TIMOTHY KNAPMAN studied at Oxford University and has written plays, musicals, songs and children's books. His books include the successful Mungo, Eleanor's Eyebrows and the Picture Book Pirates and its sequels. His work has been translated into 12 languages.

YANIV SHIMONY is an illustrator, comic artist and graphic designer. After a number of years working in advertising as an art director he chose to pursue his passion in illustration and became freelance. Most of his works are for children's books, magazines and adverts. He currently lives in London.