The Art of the Classic Sports Car 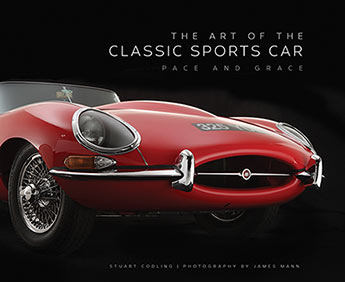 The Art of the Classic Sports Car offers a beautifully illustrated review of several decades of high-performance cars, featuring cars from around the globe, all shot in the studio.

The most fun you can have on four wheels. Sports cars are the athletes of the automotive world. Always nimble and quick, often powerful, sports cars fly where other cars lumber, and dash where others plod. The definition of a sports car is somewhat fluid, and the question What was the first sports car? will often incite a heated debate among enthusiasts. Still, most car fans feel that they know a sports car when they see one and when asked to name a few will rattle off a remarkably similar list of name plates: Jaguar, Corvette, Triumph, MG, Aston Martin, Ferrari, Lotus, Alfa-Romeo, BMW. Pressed harder, more exotic and obscure brands will emerge: DB, Alpine, Bugatti, Lancia.
Sports cars have offered road and track excitement for nearly 100 years. The original cars evolved for racing, but their appeal and popularity ensured that production versions were soon available for those whose sporting intents never left the boulevard or winding back road. Along the way, sports cars became more comfortable, sometimes almost practical, and above all handsome. But never have they been boring.The Art of the Classic Sports Car offers enthusiasts a beautifully illustrated review of several decades of high-performance cars, featuring cars from around the globe all shot in the studio to ensure a handsome and desirable book. Each featured car includes a profile discussing the car's place in sports car history along with technical and performance specs as well as a smattering of historical images and period ads.
More books by this author

Stuart Codlings and James Mann's previous Motorbooks title, Art of the Formula 1 Race Car received the "Best of Books" award for 2010 from the International Society for Vehicle Preservation's International Automotive Media Awards competition.
A journalist and broadcaster, Stuart Codling has worked in motorsport and automotive writing for more than a decade, covering sports car racing in the United States before joining F1 Racing, the world's biggest-selling Formula 1 magazine, in 2001.
James Mann is one of the world's leading car and motorcycle photographers, with more than twenty years of experience shooting for car and bike publications, the motor industry, and businesses all over the world. His work has appeared within and on the covers of more than forty books and has provided stunning visuals for numerous magazines. James is the author of the Motorbooks titles How to Photograph Cars and Art of the Formula 1 Race Car.
Frank Stephenson is one of the most distinguished automotive designers of his generation.