The The Complete Book of the Tour de France 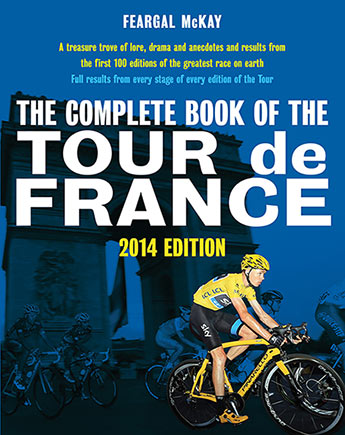 Download cover
Availability: Not available to order from this website, please try another retailer
The Tour de France is the gretest public sporting spectacle on earth. For 100 editions - every year since 1903, except during the Great Wars - competitors have battled over thousands of miles of French countryside in pursuit of the coveted yellow jersey. The Complete Book of the Tour de France brings together every statistical record, every key moment, every stage and edition winner, every jersey ever won. This encyclopeadic companion provides a complete record since the founding race, and with it everything that anyone could ever need to know about the Tour de France. But this is much more than a dry compendium of names and numbers. It also contains a summary account of each edition of the Tour de France enriched with an extraordinary wealth of Tour de France lore and anecdote, bringing back to life the stories of riders whose names have not been uttered for over a century. This is the essential companion to the greatest cycling race on earth, and reading it you might feel that you had taken part in the race yourself.
More books by this author

FEARGAL MCKAY is a freelance writer and cycling fan, based in Dublin. Since 2010 he has been reviewing cycling books for the Podium Café website. He is also an occasional contributor to other sites, including CyclingNews.com, and was one of the contributors to Bike! A Tribute to the World's Greatest Cycling Designers.