The Wild West of Louis L'Amour 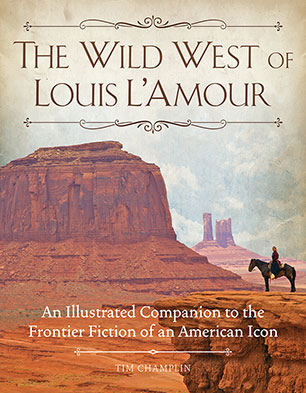 An illustrated companion to the frontier fiction of an American icon.

Heroes, adventure, history and trouble - discover it all through the eyes and pen of Louis L'Amour.At the time of his death in 1988, all of Louis L'Amour's 100 novels and short-story collections remained in print, a testament to the popularity of a prolific writer best known for his fast-paced tales of the American West. The Wild West of Louis L'Amour is a richly illustrated, sumptuous book commemorating one of America's most beloved and successful authors and the landscapes, characters, and violent times he portrayed.Author Tim Champlin (himself a writer of Western historical fiction) uncovers all of the secrets of L'Amour's themes and characters - geography of the West, lone heroes, gunfighters, mining and ranching, women, Native Americans, food, and transportation.

The frontier regions, towns, and events that featured in L'Amour's writing, as well as the real folks on whom his characters were based, come to life through thoroughly researched illustrations. The collection of more than 200 images includes maps, period photos and daguerreotypes, period illustrations, paintings of the regions discussed, modern photography of towns and countryside, and cover art from L'Amour's books and the pulp magazines in which he was published before he became a best-selling author.For the true L'Amour fan, The Wild West of Louis L'Amour is also a complete history of his colorful early life as a cowboy, lumberjack, longshoreman, prizefighter, merchant seaman, and army officer. No L'Amour fan will want to skip this comprehensive, beautiful look at the writer, the man, and the world in which he set his tales.
More books by this author

Tim Champlin was born in Fargo, North Dakota, only 80 miles from Jamestown, where Louis L'Amour was born twenty-nine years earlier. Similarities in their histories don't end there. Both have French/Irish ancestry and the fathers of both writers were large-animal veterinarians; a fact that may explain their mutual love of horses, buffalo, and other wild and domestic critters.Champlin grew up on the fringes of the old frontier in Nebraska, Missouri, and Arizona before moving to Tennessee. After earning a degree in English from Middle Tennessee State College, he went on to finish his masters at Peabody College (now part of Vanderbilt University). Living in the West fostered Champlin's lifelong interest in the Old West, which eventually led him to write historical fiction. After he sold magazine articles and short stories for ten years, Ballantine published his first Western novel in 1981. Today, with more than thirty novels to his credit, he is highly regarded for his well-researched stories that touch on almost every aspect of frontier America.