They Shot Phar Lap, Didn't They? 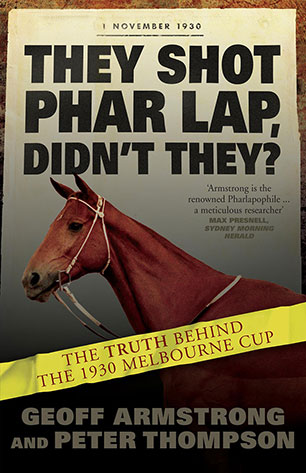 Phar Lap's rise to greatness in 1930 triggered extraordinary excitement across Australia but it also spooked bookmakers, who faced ruin if the wonder horse won the Melbourne Cup.

Phar Lap's rise to greatness in 1930 triggered extraordinary excitement across Australia but it also spooked bookmakers, who faced ruin if the wonder horse won the Melbourne Cup. Rumours were swirling: would Phar Lap be stopped, whatever the cost?

They Shot Phar Lap, Didn't They? starts with a scene straight out of a Raymond Chandler whodunit, as two shadowy figures, one armed with a shotgun, try to assassinate Phar Lap on a quiet suburban backstreet. With his life in peril, the champion is spirited away to a secret location, while one of the city's most famous detectives leads the hunt for the culprits.

On Cup Day, an hour before the jump, Phar Lap's whereabouts remain a mystery to the public. Finally, he arrives at the track, a huge crowd cheering him on. The police have been told to 'have their men along the rails' because the perpetrators of Saturday's attack intend to strike again. But was the 'shooting' all that it seemed? Only one thing is certain--after all he'd been through, it would take a phenomenal performance for Phar Lap to win this Cup...
More books by this author

Phar Lap, by Geoff Armstrong and Peter Thompson, was published in 2000 and was acclaimed by many critics as the definitive biography of the great horse. Armstrong and Thompson have been associated with a number of sports books, often in collaboration with high-profile sportspeople such as Steve Waugh and Merv Hughes, in the years before and since that book was released, but still consider their overall work on the life, death and Melbourne Cup of Phar Lap to be their most important publishing achievement.