A tribute to the world's greatest triathletes, courses and gear 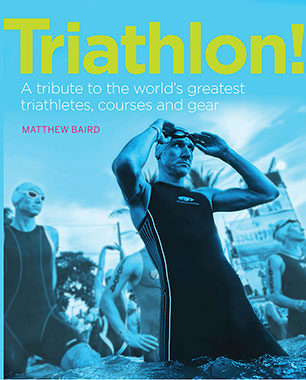 A celebration of the triathletes, courses and gear that make up one of the fastest growing sports in the world. Triathlon racing - competition across the three disciplines of swimming, cycling and running - is the ultimate test of human athleticism.

Whether it is on the Hawaii shore, on the frozen fjords of Norway triathalons attracts hundreds of thousands of competitors every year. From sprint triathlons to Ironman challenges, Triathlon! is the ultimate tribute to one of the world's toughest challenges. Including chapters on the greatest triathletes in history, from the Six-time Ironman Triathlon World Champion Mark Allen, to the irrepressible Chrissie Wellington, Four- time Ironman World Champion, and the best from across the globe, Triathlon! covers the individuals - men and women - who have made the sport their own and inspired thousands to follow in their footsteps.

Alongside profiles of the athletes, readers will also find approximately 450 beautiful full-colour unique photographs of the greatest triathlon races in the world - from Hawaii to Norway, the Alps to Alcatraz - as well as the athletes and gear. The book features sections on Australian and New Zealand eventssuch as in Byron Bay Triathlon, Ironman Australia, Noosa Triathlon, Challenge Wanaka (NZ), and the Moolooaba Triathlon Festival.

Triathlon! will give a complete account of what it's like to take part in these races, and what it requires to succeed. Triathlon! will also tell the complete story of the evolution of the triathlon gear - from the development of the Triathlon bikes, as explained by experts in their field, to the pursuit of aerodynamics, wetsuits, GPS watches and nutrition to give a complete account of the world of triathlon competition.
More books by this author

MATT BAIRD is the Features Editor of 220 Triathlon magazine, the UK's number one-selling triathlon magazine of the past 25 years. Matt has worked on 220 for the past six years, covering races, commissioning and writing features, and overseeing the news and gear sections. Matt has also contributed to Men's Fitness, the Radio Times and a variety of international triathlon magazines. Matt lives in Bristol and dreams of one day placing in the top 75% of a triathlon.