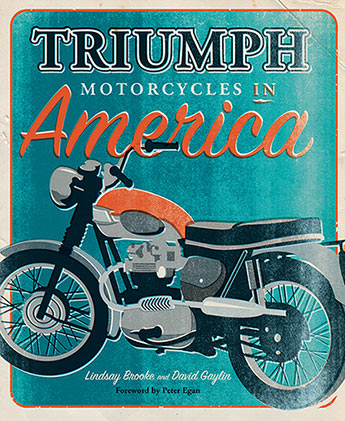 Triumphs have been part of North America’s motorcycling soul since long before World War II. Born in Britain but bred in the US and Canada, Triumph’s iconic models - Bonneville, Trophy, Thunderbird, Daytona, Tiger, Speed Twin, Speed Triple, and Rocket III - resonate deeply with enthusiasts who love their style, sound, performance, and undeniable coolness. It’s not coincidental that Triumph was Steve McQueen’s favourite ride.

Triumph Motorcycles in America is packed with thorough, entertaining text, plus hundreds of historical images, most of them in colour and never before published. Written by award-winning professional journalist and lifelong Triumph fanatic Lindsay Brooke, with a foreword by America’s favorite 'Triumph guy,' Peter Egan, Triumph Motorcycles in America is a must-have for every fan of Britain’s most legendary bike brand.
More books by this author

Detroit-based auto writer Lindsay Brooke has been covering automotive and motorcycle technology and history for more than thirty years. He is editor in chief of Automotive Engineering magazine, published by the SAE. A longtime British motorcycle enthusiast, historian, and owner of multiple Triumphs, Brooke has authored two other Triumph titles for Motorbooks. He and David Gaylin are widely acknowledged as experts on Triumph’s American story. Growing up in Baltimore near the Triumph Corporation, David Gaylin’s first bike was a 1970 Bonneville. After TriCor closed in 1975, he was able to acquire truckloads of internal memoranda, brochures, photos, manuals, and service bulletins. This vast archive became the foundation this book and later Gaylin’s popular Triumph Bonneville and TR6 Restoration Guide. His latest book is an illustrated history of the Wall of Death.