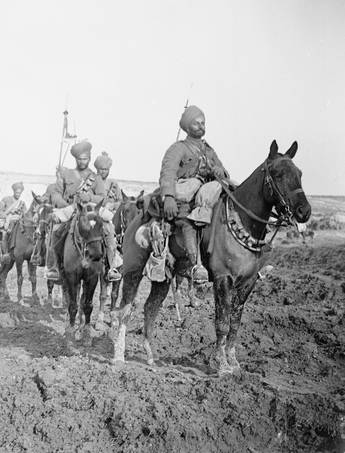 An incredibly rare personal account of the First World War and its aftermath that fills a significant gap in our knowledge of how an Indian soldier experienced the conflict that shaped the history of the world.

Remarkably, among the many personal accounts of the Great War published over the past century, the experiences of the ordinary Indian soldier, one of the hundreds of thousands of men who played a key role in one of the defining events of the 20th century, have never come to light - until now.

Translated from a recently discovered unpublished memoir, World War Sikh recounts the insightful and poignant story of Harnam Singh, a young man hailing from a military family in Punjab who joined the Indian Army's 30th Lancers (Gordon's Horse) as a trooper a year before war was declared.

From the euphoric reception given by the people of Marseilles in November 1914 to his battlefield experiences on the Western Front and in Mesopotamia (Iraq), Harnam Singh's observations of daily military life in far flung lands among foreign cultures are unique. They provide a compelling and crucial voice to ordinary Indian soldiers, members of the forgotten legions of the Great War whose contribution to the making of the modern world remains largely unknown.
More books by this author

RANA TS CHHINA is a veteran of the Indian Air Force and an authority on the former British Indian Army. He has authored several books on Indian military subjects and is a consulting historian for the Indian armed forces. He currently heads the United Service Institution of India, Centre for Armed Forces Historical Research, the only dedicated centre for researching Indian military history in the world. He is also a recipient of national honours from the UK and Belgium for his work on the official India and the Great War centenary commemoration.