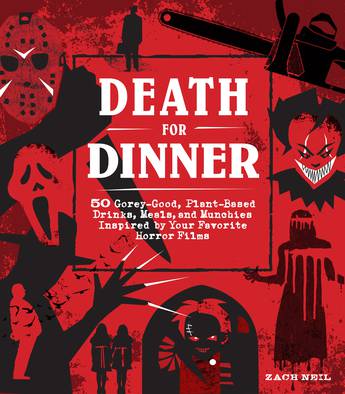 Visit your dark side with 50 frightfully delicious plant-based comfort-foods, baked goods, and cocktails inspired by your favorite horror films.

From Zach Neil, the mad mind behind the Beetle House restaurant and The Nightmare Before Dinner cookbook, Death for Dinner not only reimagines your favorite comfort foods as deliciously plant based, but also as visually gruesome, including stick-to-your guts classics like mac and cheese, burgers, pizza, baked breads, funnel cakes, root beer floats, cheese steaks, red velvet cake, and more, including:

- Crystal Lake BBQ Sliders, inspired by Friday the 13th - The only thing better than warm sunshine, campfires, and working up an appetite after escaping the clutches of Jason Vorhees are these pulled mushroom sliders.
- Children of the Hominy, inspired by Children of the Corn - An ancient recipe from Gatlin, Nebraska, this pozole will make anyone rise up from the stalks.
- The Hills Have Fries, inspired by The Hills Have Eyes - This hill of hand-cut french fries smothered in a béchamel and chili sauce and topped with fresh scallions, red onion, fakon, and cilantro and lime sour cream will have everyone watching you.
- Blood Orange Cheesecake Trifle, inspired by Dexter - Complete with blood orange, vegan cream cheese, and hints of lemon, this dessert is the right amount of sweet and airy—no gloves or plastic wrap are required to make.
- Never Sleep Again, inspired by Nightmare on Elm Street - Stay awake (and alive!) with this alternative take on an old-fashioned cocktail made with a shot of espresso.

Though designed to look impressively ghoulish, the recipes are easy to recreate at home and their deliciousness will impress even the most stubborn carnivores. Now you can throw the ultimate Halloween party, or some epic movie nights. Will Freddy, Michael, and Jason make the guest list? [cue the beet-juice spatter]
More books by this author

Zach Neil is an American entrepreneur, artist, and chef. He has been featured multiple times on the Food Network and has gained additional notoriety through his popular chains of themed restaurants, which have been featured on Watch What Happens Live with Andy Cohen, Good Day New York, MSNBC, and ABC World News Tonight, among others. Zach combined his artistic pursuits with his culinary skills to create the eclectic, Halloween-themed Beetle House restaurants, which have broken media records in the restaurant space. His first cookbook, The Nightmare Before Dinner: Recipes to Die For, features all of the Beetle House recipes, plus a selection of brand new, never-before-seen dishes with seasonally inspired flavors and a dash of Gothic insanity. In addition to his restaurant franchises, Neil is considered an authority on pop-up bars and restaurants with his own television programming and lifestyle brands in the works. You can find Zach on Instagram @therealzachneil and learn more about the Beetle House restaurants at beetlehousela.com.