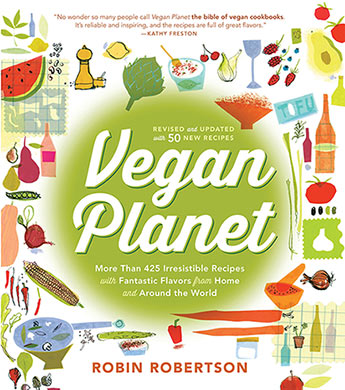 A revolutionary, 'first-of-its-kind' bestselling vegan cookbook gets an extensive revision and update to incorporate new flavors and ingredients that appeal to vegan consumers.

When it first appeared in 2003, Vegan Planet revolutionized animal-free cooking. Robin Robertson's pioneering book played a leading role in the passage of veganism from subculture to mainstream culinary lifestyle. Its breadth and variety of fantastically flavorful food not only gave vegans what they craved, it gave them food they could serve up happily to their non-vegan family members and friends. One decade and more than 100,000 copies later, this important classic is back in a thoroughly revised edition. Vegan cookbooks are big sellers today, but in a thicket of topical and niche titles there's a need for an everyday cooking bible on which vegan cooks can rely. The new Vegan Planet meets that need handsomely. Robertson's extensive updates cover such things as: the newly expanded range of whole grains that are available; super greens, such as kale and chard, that are rising in popularity; new facts concerning which cooking oils are healthiest and most earth-friendly; and new saucing and flavoring ideas from the global pantry. Throughout, there's the spirit of adventure and of culinary creativity that has cemented Robertson's reputation at the top of the vegan pantheon.

Robin Robertson has written more than twenty cookbooks, including the bestsellers Fresh from the Vegan Slow Cooker and Quick-Fix Vegan. Formerly a columnist for Vegetarian Times, she also has written for Cooking Light, Natural Health, and other magazines. A vegan herself, she lives in the Shenandoah Valley of Virginia with her husband Jon. Her website is www.globalvegankitchen.com.